A delightful photo from the Antarctic

Let’s go south for a while and have a look at a fantastic photo from the Antarctic. The southernmost continent is uninhabited except for scientists, the occasional artist, and cruise ship visitors. It is subject to international agreements that prevent any one country from claiming it. How nice is that!

In terms of polar exploration history, the Antarctic is long associated with England’s Captain Robert Falcon Scott and the Anglo-Irish explorer Ernest Shackleton. It was, however, Norwegian Roald Amundsen who reached the South Pole first in 1911. When Amundsen heard that Scott had died in his attempt to reach the pole, he realized Scott would be a martyred hero, proclaiming that the British captain had won the race after all. One of the last things Scott wrote was of the pole, which he described as “an awful place.”

Yet there are pleasant moments in the history of Antarctic exploration, even from Scott’s last expedition, and this photograph brings one of them to life. 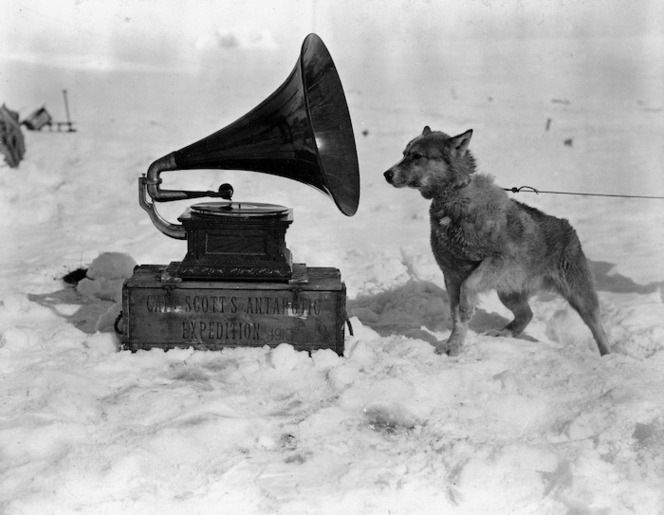 This photograph was shared by historian Dr. Kristine Alexander of the University of Lethbridge. Dr. Alexander shares my interest in empirical history and the cultural developments that underpin this history. She is the author of a new award-winning book called Guiding Modern Girls: Childhood, Empire, and Internationalism in the 1920s and 1930s.

The photo shows a dog called Chris checking out the gramophone. You can read “Captain Scott’s Antarctic Expedition” on the box on which the gramophone rests. This adds a poignancy to the photo but it is Chris who dominates, his curiosity and keenness radiating out.

The photo was taken by the celebrated Herbert Ponting, who produced numerous compelling images of the Antarctic. It was taken during the British Antarctic (“Terra Nova”) Expedition of 1910-1913, during a January summer evening.

Interestingly, the British explorers loved dogs but they also adored ponies and brought some of them to the Antarctic, for which they were ill-suited. In fact, Scott’s over-reliance on ponies was a factor in his failure and ultimate demise. He should have relied more on dogs like Chris, as was the practice of the highly successful Amundsen.

(All Things Arctic is a blog written by Maura Hanrahan, author of the newly-released book, Unchained Man: The Arctic Life and Times of Captain Robert Abram Bartlett.)

3 thoughts on “A delightful photo from the Antarctic”